It has been near, at, and above 100 degrees here in central Texas for awhile now — too damn long — and that heat can get brutal.

I remember this heat wave we had many years ago with temps well over 100 that seemed to go on forever, and it got downright depressing.

One thing that is always mentioned when it gets really hot is to stay hydrated — make sure you drink enough fluids, i.e., water.

I talk about drinking water quite a bit because it is important. I’ve felt the effects of letting myself get dehydrated, and it ain’t fun.

Recently, I read an article where the National Academy of Medicine recommends adult women drink at least 91 ounces of water a day (91?), and men drink 125 ounces a day. For reference, a gallon is 128 ounces a day. Sounds like a lot of water, but if you think about the bottled water that most of us drink these days, it’s less than 8 bottles.

This same article also cautioned against drinking too much water all at once.

There is a thing called water intoxication, or over-hydration, in which too much water poured into the system over a short period of time can disrupt the balance of electrolytes and cause sometimes serious problems.

So the NAM recommends spreading out those six to eight bottles of water throughout the day. Drinking water with electrolytes added is a good idea, and eating a banana or some other fruit, particularly after exercise, is another good idea.

As always, do your own research and decide what is best for you. 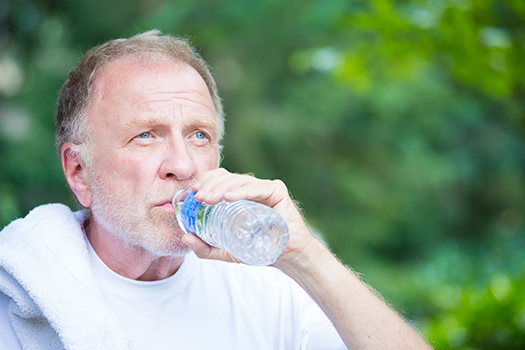